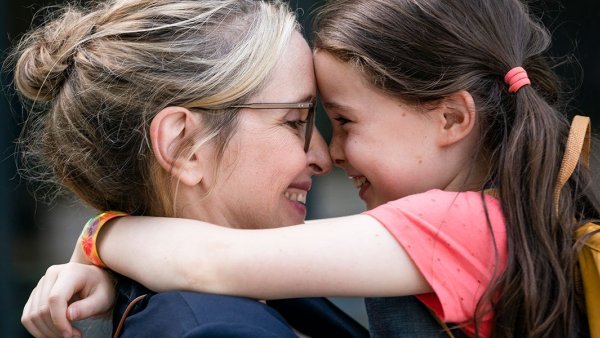 It’s no coincidence that so many of the best horror movies—“The Exorcist,” “Rosemary’s Baby,” “The Babadook”—focus on parents because there is nothing more terrifying than being one. An early scene in Julie Delpy’s “My Zoe” captures that constant, low-key fear as vividly as I’ve ever seen. Isabelle (Delpy), a divorced mother, is working; her daughter Zoe (Sophia Ally) is spending the day with her father, James (Richard Armitage). Isabelle has sent a couple of texts, asking how things are going, but James has not responded. She tries calling – no answer. And immediately, without skipping a beat, she goes to Google to see if there have been any accidents at the park where they were spending the day. In that sequence of events, Delpy is capturing two of the key emotions of having children: 1.) The sheer panic of just not knowing what’s happening, where your child is and what they’re doing, and 2.) Immediately imagining the absolute worst-case scenario.

“My Zoe” is also a movie about living through the absolute worst-case scenario. Its early passages don’t seem too far removed from Delpy’s earlier directorial efforts, like “2 Days in Paris” and “2 Days in New York”; it’s a dialogue-heavy, relationship-centered story, just more drama than comedy/drama. Isabelle and James’s separation is fresh, and they’re still navigating some very choppy waters, unable to work out simple joint-custody schedules issues without mediation and turning every conversation into a conflict. The exhausting emotional turmoil of those interactions, however, seem like a necessity for Isabelle, who will withstand them to get as much time as possible with her young daughter. “It’s like I’m missing half her life,” she says.

And then, one morning, Zoe doesn’t wake up. She seemed a little sick the night before, but she didn’t have a temperature, and Isabelle figured they’d ride it out; now she finds herself in the back of an ambulance, pleading with the EMTs to tell her what’s going on. (This entire sequence is about as upsetting as anything I’ve seen in a recent movie.) Initially, they can’t tell her; she and James sit in the hospital, just waiting, powerless, helpless. They’re told it was an aneurysm. They’re told, “There’s very little brain activity at this point.” They’re told she will live – “the question is, what kind of life?”

You might assume Delpy is going to take the obvious road, and craft a heart-wrenching drama about the end of life, the right to die, and who gets to make those choices. And you would be wrong. Instead, she wonders what would happen if Isabelle—a scientist by trade—became driven, obsessed even, by the idea of “fixing” this horrible tragedy. And if you’re willing to follow her down that path, the film’s unexpected shift into something like science fiction doesn’t seem like a stretch at all.

Delpy’s thoughtful screenplay is somewhat theatrical not in its style, but in its approach – she’s dealing with big ideas here, dramatized in dialogue by approachable characters. She’s got a particular gift for naturally incorporating backstory; we learn all the details of the divorce in an argument during this moment of stress, an exposition dump smartly packaged as each party reiterating their revisionist history. (She can also over-talk the plot points, and the second half of the script could’ve frankly used some tightening.)

She remains an actor-first filmmaker, so her camera is sometimes stylized yet never obtrusive. But she’s a master of mood. Observe her evocative use of sound and unexpected cutaways, or how she uses the warmth of Isabelle’s memory to contrast the sterility of the hospital, creating one of the film’s most potent images: of this mother walking down the street, hand extended for a child that will, it seems, never run up to grasp it again. There are moments in “My Zoe” that are hard to watch, unthinkable in their emotional brutality. That Delpy finds her way to the ending she does—and earns it is—no small accomplishment. [B]